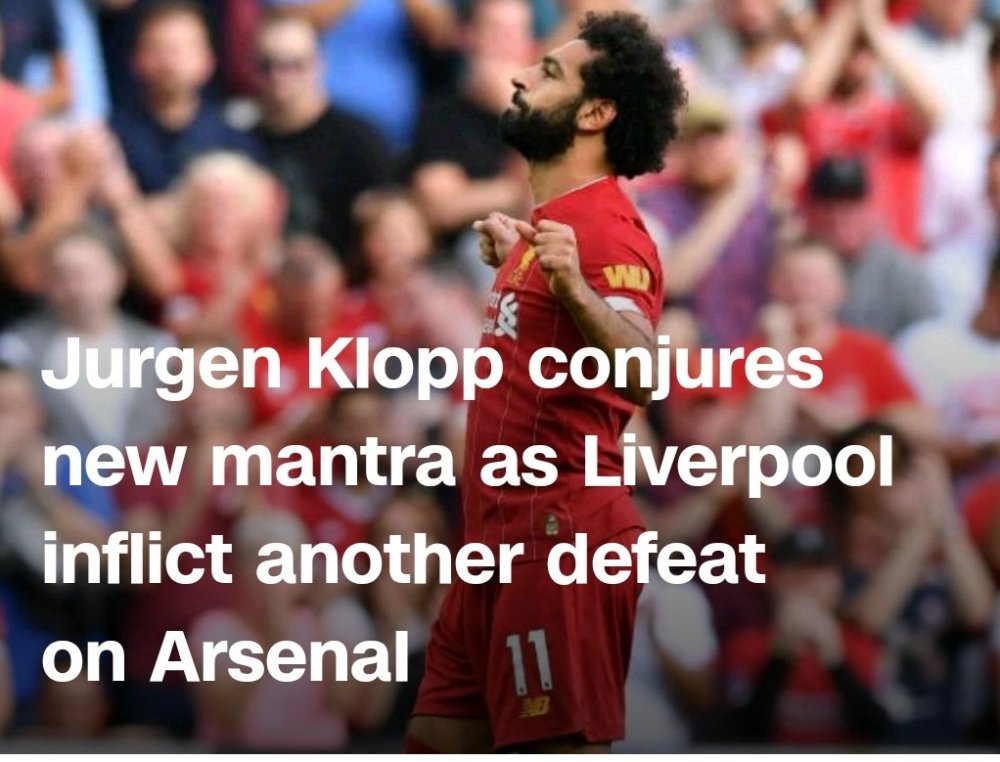 London (CNN) – “Our identity is intensity.”
It may sound like a line from Liverpool’s ’80s anthem “Anfield Rap,” but it was the mantra of manager Jurgen Klopp after his side inflicted a 3-1 defeat on rivals Arsenal on Saturday to move clear at the top of the English Premier League.
Arsenal’s defense was peppered and pressured as Liverpool’s three-pronged attack of Mohamed Salah, Sadio Mane and Roberto Firmino probed and pushed in another Anfield thriller between the two sides. 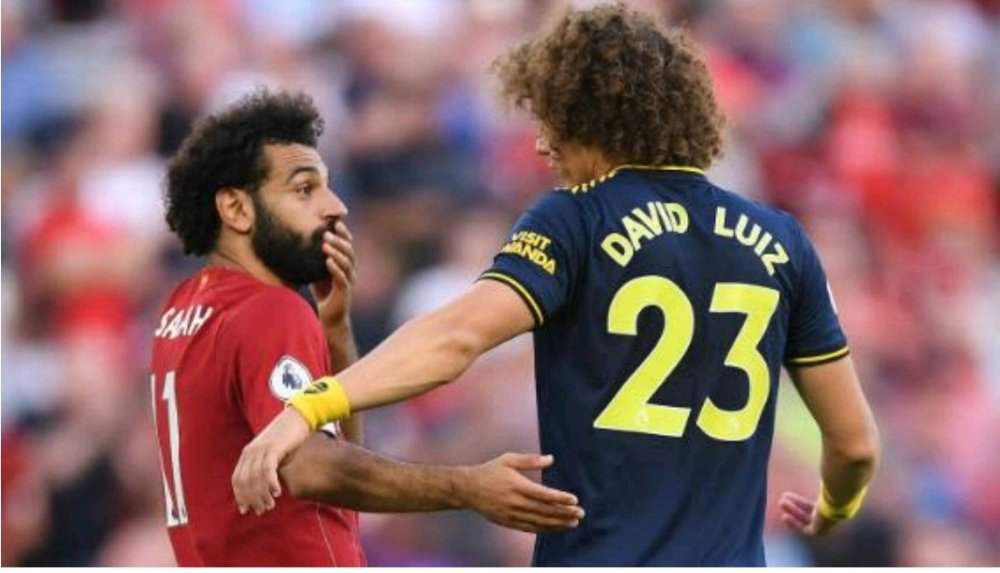 “It was a performance full of power, full of energy, full of greed, full of passion which you need against such a good team like Arsenal,” Klopp told broadcaster Sky Sports.
“The work rate of the boys is exceptional. Our identity is intensity and that’s how the boys showed up today.
“It’s our fifth game (of the season) already. What we did in the first games we did for longer and more precisely.”

With a glittering front line but question marks over their defense, there was perhaps a little irony that a defender opened the scoring for Liverpool in this much-anticipated tie.
Joel Matip jumped clear of the Arsenal back line — which was too busy trying to muscle out Matip’s defensive partner Virgil van Dijk — to head in just before halftime.
Salah added a second with an absolute rocket from the penalty spot after David Luiz was penalized for tugging the Egyptian’s shirt when he was on the move in the box.

The penalty gave Liverpool extra impetus and Salah ran clear to add a third goal with a sensational solo effort.
“The boys scored wonderful goals,” Klopp added. “The first one was a sensational set piece. The decision about the penalty was absolutely obvious, everyone could see there was a shirt where it should not be, and then Mo’s third goal was unbelievable.”

The penalty came just two minutes into the second half and effectively snuffed out the chance of a meaningful Arsenal fightback.
‘Can’t help himself’
Luiz, a pragmatic summer transfer designed to shore up Arsenal’s defense, conceded the penalty with an instinctive grab of Salah’s shirt.
“He just can’t help himself!” former Manchester United defender Gary Neville commented on Sky Sports.

Luiz called the incident “just a reflex” and went on to argue that officials aren’t able to judge the power of the pull and that Salah told him after the final whistle that he didn’t feel anything.
“With VAR (video assistant referees), it’s difficult for them to see the power,” said Luiz. “If you see the shirt going like that it’s difficult for the referees to say it’s not a penalty.
“If you play with an extra-large shirt now it would be a penalty every time. It’s interpretation.

“Mo-Mo is my friend and he said he didn’t feel that … but football is like that.”
‘Special talent’
Despite the dizzying Liverpool surge, Arsenal kept their heads and added a late goal through substitute Lucas Torreira to deny the Reds a clean sheet.
The London club also remain second in the table, three points behind Liverpool.

For Arsenal fans looking to take further consolation from another heavy Anfield defeat, it came in the shape of Nicolas Pepe.
Arsenal’s record signing — who joined the Gunners for a reported 72 million pounds ($88 million) earlier this month — made a confident debut, showing pace to rival Liverpool superstar Salah. 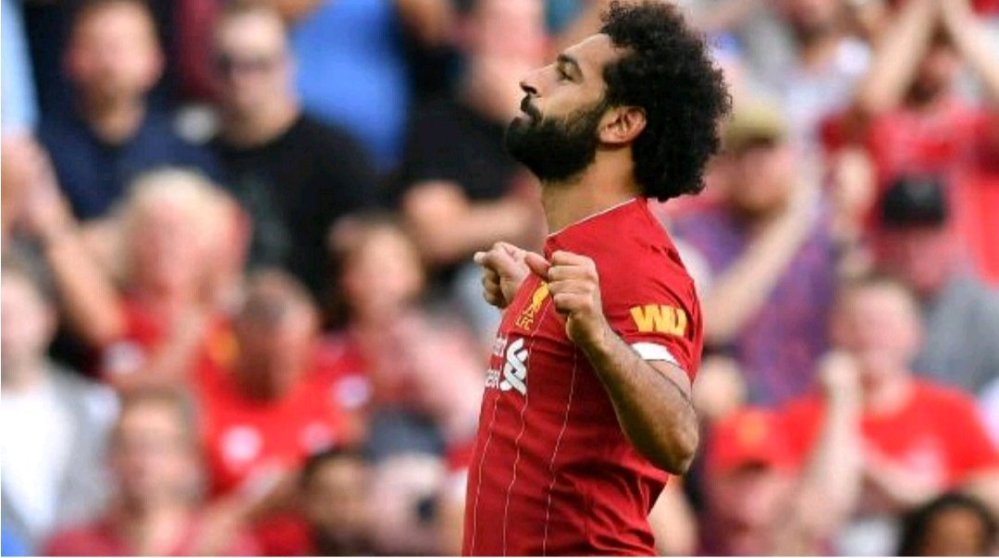 “They’ve got a special talent in Pepe,” former Liverpool player Jamie Redknapp said on Sky Sports. “I’ve been so impressed by him. He’s been breathtaking. He’s got that blistering pace that defenders hate.”
“If he carries on like that, he’ll score many goals for Arsenal.”
Unai Emery might have hoped Pepe could have done just that at Anfield, but with the new Premier League season just three matches old, defeat wasn’t quite so hard for the Arsenal boss to swallow.

“The first half was maybe the best chance for us with Pepe, but after their goal it was not easy,” Emery said. “The key was the second goal, that penalty was very soft.
“But our reaction afterwards was good. We continued doing our work. … I think some players will look (and think) that they took another step here today.
“After we finished 3-1 pushing, that is the spirit we want.”

This fixture is the highest-scoring in the history of the Premier League and has produced some classic encounters — before Saturday’s clash, the two sides had clocked up 155 goals and a record six hat tricks.
But for Arsenal, there are still scores to settle at Anfield — while Liverpool walk on.
TM & © 2019 Turner Broadcasting System, Inc.
A Warner media Company.
All Rights Reserved.