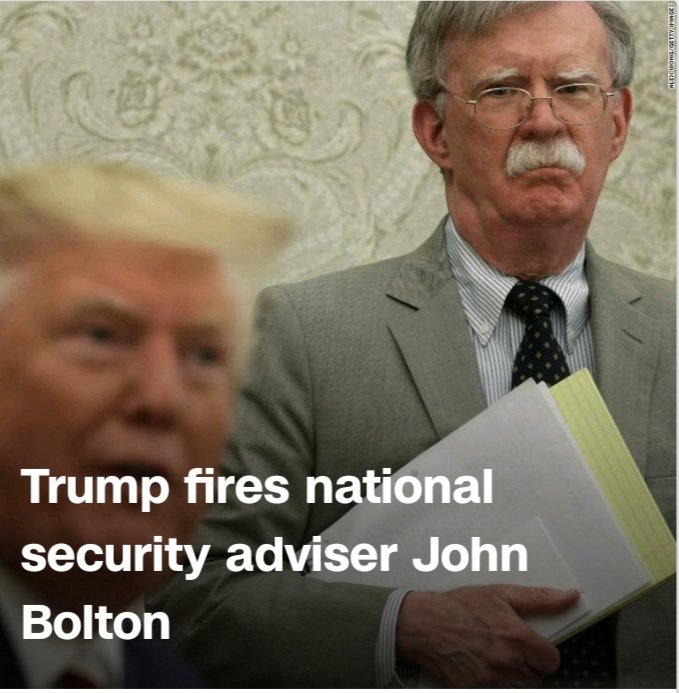 Washington (CNN) – President Donald Trump abruptly announced in a tweet Tuesday that he has asked national security adviser John Bolton to resign, noting that he “strongly disagreed with many” of Bolton’s suggestions “as did others in the administration.”
“I thank John very much for his service. I will be naming a new National Security Advisor next week,” Trump wrote.

The tweet came just one hour after the White House press office said Bolton was scheduled to appear at a Tuesday press briefing alongside Secretary of State Mike Pompeo and Treasury Secretary Steve Mnuchin.
Asked during the briefing whether he and Mnuchin were surprised that Bolton was fired, given that he was supposed to appear alongside them, Pompeo said, “I’m never surprised.”
Bolton, however, maintains he offered to leave his post voluntarily, tweeting minutes after Trump’s announcement, “I offered to resign last night and President Trump said, ‘Let’s talk about it tomorrow.'” 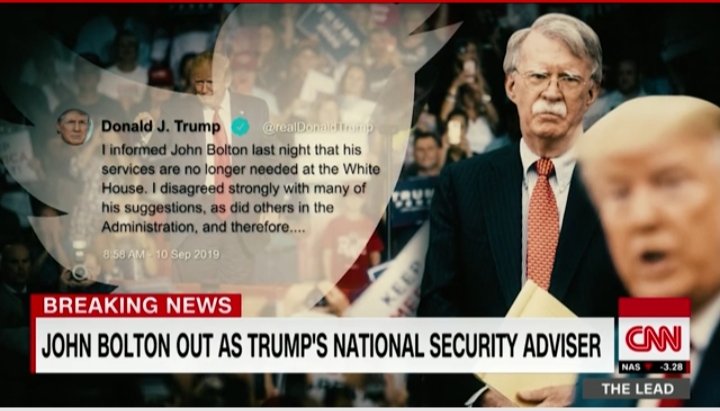 Bolton reiterated the point that it was he who offered to resign on Fox News Tuesday.
His resignation letter to Trump, dated Tuesday, was short and to the point with Bolton writing: ‘I hereby resign, effective immediately, as Assistant to the President for National Security Affairs. Thank you for having afforded me this opportunity to serve our country.”

Turmoil in Trump’s national security team
Trump has plowed through an unprecedented number of national security professionals while multiple geopolitical crises have played out.
The President has had three national security advisers — Bolton, Michael Flynn and H.R. McMaster. He has summarily fired a secretary of state, Rex Tillerson, by tweet after undercutting the former ExxonMobil CEO for months.

Bolton’s departure comes as tensions with Iran are escalating in the Persian Gulf, North Korea continues to develop its weapons capabilities, arms control experts are warning of a potential nuclear arms race with Russia and trade tensions with China are intensifying, while Trump is discussing a drawdown of forces in Afghanistan.
White House deputy press secretary Hogan Gidley told reporters that Charles Kupperman is the acting national security adviser.

“John Bolton’s priorities and policies just don’t line up with the President’s and any sitting president has the right to put someone in that position that can carry out his agenda. That became no longer tenable so the President made a change,” Gidley told reporters.
He claimed there was “no one issue” that led to Bolton’s firing, and referred reporters to the forthcoming briefing for more information.
Yet, Bolton’s ouster was so sudden that the now-former National Security Adviser even led a meeting of top administration officials, known as a principals committee meeting, Tuesday morning prior to Trump’s tweet, a source familiar told CNN.
The source said the meeting went on as planned and there was no indication that Bolton’s firing was imminent.

Writing on the wall
The campaign by Trump allies to push Bolton out of the administration had ramped up in recent weeks, multiple sources told CNN.
The President had received multiple phone calls and appeals to replace Bolton with someone who agreed with him more and was willing to follow through with his decisions when he didn’t. This was something Trump heard since he hired Bolton — but people noticed the President’s frustration with him was growing in recent weeks so they upped the pressure.

A senior administration official echoed that sentiment, telling CNN that Trump has been getting more and more irritated with Bolton over the past several months for his statements on Iran, Venezuela and now Afghanistan.
Trump no longer believed Bolton could advocate for the President’s agenda, and instead felt he was harming his credibility, the official said.

Bolton had recently expressed reluctance to defend the Trump administration on television. He was soft-booked to do “Meet the Press” and “This Week” on August 25 during the G7 summit, according to people familiar with the matter, but he later backed out.
According to one official familiar with the situation, Bolton felt uncomfortable explaining and defending Trump’s positions on various issues, including Russia, which had become a central topic of the summit.

Other officials told CNN that Larry Kudlow and Mnuchin were simply better positioned to speak about economic issues, which were also in focus at the G7.
NBC and ABC declined to comment.
Ultimately, a disagreement between Trump and Bolton over the President’s decision to host leaders of the Taliban at Camp David appeared to be the last straw.
Trump was irked by reports that he had faced internal pushback from Bolton over his decision, multiple people familiar with his frustration say. The President announced the plans for the meeting were canceled on Saturday. 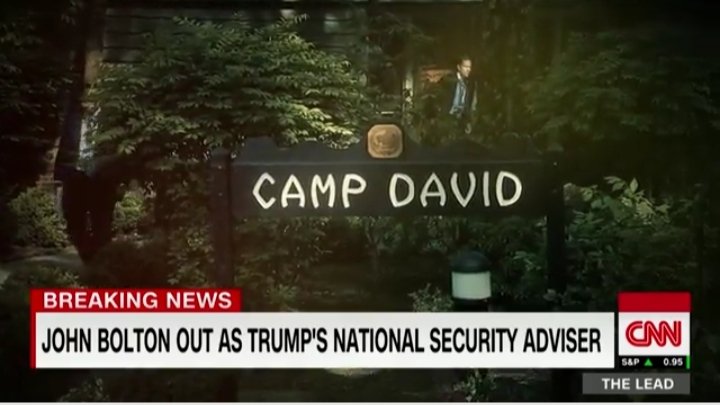 Bolton and Trump got into a heated argument Monday night over the President’s plan to host Taliban leaders at Camp David and Bolton did not back down, two people familiar with what happened said.
One senior official confirmed this argument happened in the Oval Office and at the end of the meeting, the President asked Bolton for his resignation.

One of the factors that prompted Trump to fire Bolton was the concern inside the White House that Bolton’s aides were making it sound as though Vice President Mike Pence had opposed the Taliban meeting at Camp David, according to two senior administration officials. One official pointed to Pence’s tweet saying he would have supported such a move.

CNN reported last week that tensions between top figures on Trump’s national security team had devolved into all-out hostility, creating a deep disconnect between staffers on the National Security Council, led by Bolton, and the rest of the administration, six people familiar with the matter said.
Pompeo acknowledged Tuesday that he disagreed with Bolton “many times.”
“That’s for sure,” he said, but added he disagrees with others as well.

Bolton was initially brought into the administration last year to replace HR McMaster partly due to his hawkish position on Iran — supporting Trump’s exit from the Iran nuclear deal — but he soon began to clash with the President’s vision for diplomacy in North Korea and most recently on Afghanistan. 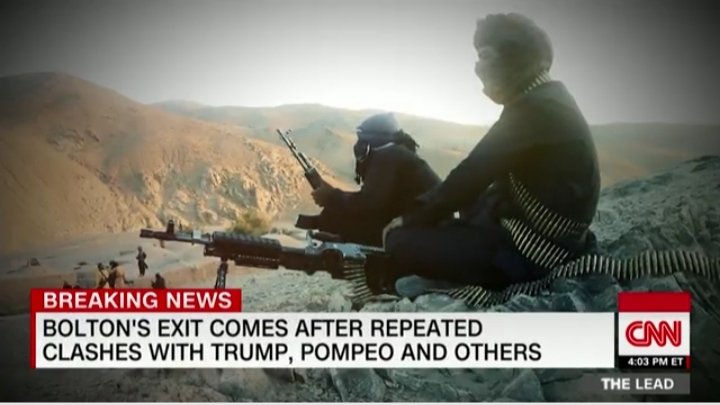 Trump also felt like Bolton wasn’t a forceful enough advocate for him in the media — and that when he did make appearances, he wasn’t convincing enough, since it was evident he didn’t believe in some of Trump’s foreign policy goals, a senior administration official said.

Some West Wing officials in recent weeks began to get the sense Bolton’s days were numbered based on his clashes with other officials in the administration and differing views on key issues.
Those involved in national security discussions took notice that Bolton was “going through a tough time” as one source put it. Aides were waiting to see if he could weather the storm as he had in the past which clearly didn’t happen this time around.
Officials learned of firing from Trump’s tweet
A senior administration official told CNN that White House and national security officials learned about Bolton’s firing from Trump’s tweet. The official described aides as frantically trying to figure things out following the tweet. 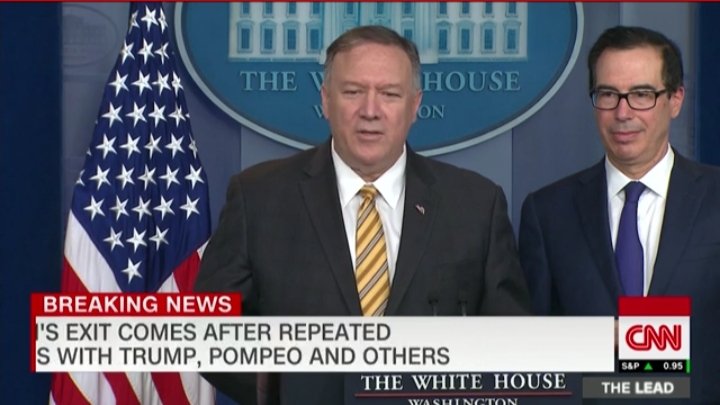 Specifically, officials at the National Security Council are now wondering about the future of their organization after Bolton’s abrupt firing.
When he arrived in March 2018, Bolton brought with him several officials to fill key roles — and the fate of those officials isn’t clear.
As staffers detailed to the NSC phased out, Bolton worked to replace them with people he’d worked with previously and he considered loyal to him. His goal was to have senior leaders in place that were “his people” as the 2020 election season began.
If those officials depart en masse, the NSC will be majorly depleted, so it’s not expected they will all follow Bolton out the door.
But there is uncertainty today about what happens next.

Mixed reaction
Utah Republican Sen. Mitt Romney called his departure a “huge loss” for the Trump administration and said he was “very unhappy” to learn Bolton was leaving.
“The loss of John Bolton as a senior leader in foreign policy is an extraordinary loss for our nation and for the White House,” Romney told reporters, adding that he was an important voice in the room because he would take a different view.
But fellow Republican Sen. Rand Paul praised the firing of John Bolton, predicting that his removal made the threat of war with Iran or other adversaries less likely.
“I think that the President deserves to have someone around him who agrees with his policy. I think the threat of war worldwide goes down exponentially with John Bolton out of the White House,” Paul told reporters.
“I think his advocacy for regime change around the world is a naive world view. And I think that the world will be a much better place with new advisors to the president and hopefully somebody who’s actually listening to what the President says over and over again, that he wants to bring America’s longest war to a close,” he said.

South Carolina Republican Sen. Lindsey Graham said Tuesday that Bolton served the country well but the President “deserves a national security adviser he has confidence in.”
Graham didn’t explicitly say that he had a heads up but also suggested the Taliban meeting contributed to his dismissal.
“I think Bolton served the country well. He gave the president his honest opinion and it’s time for him to move on,” Graham said.
Asked if he had a heads up Bolton would be fired, Graham said: “I know there were some concerns about the whole Taliban meeting, but I didn’t know for sure.”
Sen. Chris Murphy, a Democrat and member of the Senate Foreign Relations Committee, also weighed in on Bolton’s departure Tuesday in a statement.
“This revolving door of American leadership is devastating to our nation’s security as our allies now turn to more stable nations — like China and Russia — as our foreign policy infrastructure falls apart,” Murphy said.

“John Bolton was the wrong choice and the silver lining to this instability is that there will be fewer people whispering war chants in the president’s ear. But no one of any quality is going to take a job in the nation’s national security cabinet so long as everyone’s head is permanently hovering slightly above the chopping block,” he added.
TM & © 2019 Turner Broadcasting System, Inc.
A Warner media Company.
All Rights Reserved.