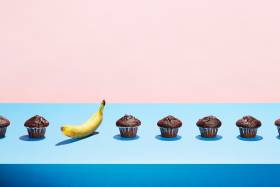 Catherine was formally diagnosed with
depression at 13 years old and anxiety at 17. Both have severely impacted her relationship with food .
“When I’m in a depressive episode, I tend towards disordered eating ,” she told Global News. “Maybe I’ll have one meal instead of three. [I often] eat too much or too little.”
Catherine, whose last name has been withheld to protect her identity, also works as a line cook.
“I spend all day cooking for other people [and] I find it really hard to take care of myself in the same way,” she said.

When she feels depressed, she tends to opt for things like a handful of crackers or ordering a pizza — “something that requires little to no food prep.”
“My ‘depression meal’ a lot of the time is ordering food out, but because that’s expensive, I also eat a lot of cereal.”
Catherine believes the food she eats when she’s depressed, which typically lacks any real nutrition, reinforces her symptoms, furthering her depression and contributing to poor health overall.

“I feel noticeably better when I eat something good and healthy, but it’s really tough to find the spoons to do that sometimes,” she said. “The junk food makes me feel worse.”
It’s more common for people with depression to experience a decrease in appetite, but research also shows that as many as 35 per cent of people may experience an increase , said Dr. Simon Sherry, a registered psychologist at CRUX Psychology in Halifax.
“Changes in appetite may very well be part of how depression is expressed within a given individual, and we cannot assume uniformity in response,” Sherry said.

STORY CALL OUT: Do you struggle with eating when you’re depressed? Do you often find yourself reaching for junk food because it’s the easiest option? I want to hear your “depression meals” stories. DMs are open!
#journorequest
— Meghan Collie (@MeghanCollie)
September 9, 2019

The answers varied. A lot of people reach for junk food (“usually a tub of icing or peanut butter,” said Natalie Preddie), while others find it hard to even think about eating.
“My depression meal is no meal. I just can’t find the energy to make a meal and I lose all appetite and feel repulsed by the thought of eating,” Aqsa Hussain said.
However, most responses had two things in common: when people feel depressed, they often go for foods that are easy to procure and provide them with comfort.
For example, Emmie Harrison-West said she always goes for a treat her late grandfather used to buy her when she was a child.
“Whenever I’m depressed, I genuinely go to the nearest shop and buy a pork pie to eat on my way home,” she said. “Even though I shouldn’t eat pastry (hello gall stones at 14), it makes me feel a strange sort of comfort.”

It’s common to use food as a coping mechanism for depression, according to Sherry.
“Depression can have appetite-promoting effects… and [these people will] describe something like an eating-to-cope pattern. This is sometimes known as emotional eating,” he said.
“They’re eating to try and regulate the often difficult emotions that go along with depression.”
Sherry also says eating can satisfy an “escape motive” for some people.
Food can be “escape from the intense self-criticism [and] the negative self-view that often characterizes depression,” Sherry said. “The experience of eating may help wipe out a higher order of negative thoughts of self.”

Depression is also a problem of “low motivation and low energy,” which can muddle a person’s desire to cook or make healthy dietary choices. Sherry says this could explain why some people crave junk food or takeout during depressive episodes.
“[Depression] often involves a massive challenge of self-regulation,” said Sherry. “It becomes hard to establish a routine, and absent a routine, regular sleeping, healthy eating and proper exercise become extremely difficult.”

How depression can change your diet

To understand how depression can affect one’s appetite, one needs to understand how depression may influence mood.
“When your brain is depressed, it may be that the reward circuitry within your brain is hyperactive,” said Sherry. “That could influence how your brain responds to food.”
For people who experience decreases in appetite, their brains may respond to food cues differently.
“In their case, you may not see the hyperactivity but the hypoactivity of the insular regions in the brain, and these insular regions within the brain are responsible for regulating your body’s physiological state,” he said.

Things you should remember

During a depressive episode, just finding your appetite can be difficult. For registered dietitian Abby Langer , simply eating is a step in the right direction.
“I would rather you eat [a box of macaroni and cheese] than nothing at all. That’s called harm reduction,” she said.
“The worst harm is not eating at all. The second worst is eating a bag of chips or [a box of macaroni and cheese]… They may not be the best thing for you, but they’re better than the alternative.”

If depression suppresses your appetite, Langer says to focus on choosing “what feels good or looks good to you in the moment.”
However, there are some things you can keep in your kitchen at all times so you’re prepared for the next time a depressive episode hits. First, she suggests protein bars.
“They’re quick, they’re easy, they don’t need preparation and they’ll give you a boost without giving you too much sugar,” she said.
“We want things like whole grains, fruits and vegetables, but even unsweetened dried fruit is fine.”

Langer also recommends whole-grain cereals that are either unsweetened or sweetened very lightly, oatmeal with a tablespoon of peanut butter in it or popcorn with peanut butter on it.
Registered dietitian Andrea Falcone also suggests keeping your pantry stocked with things like cans of tuna or oatmeal “to support a balanced intake.”
“Peanut butter or another type of nut or seed butter is a great item to also have, enjoyed on whole-grain crackers, a slice of whole-grain toast or with fruit,” she said.
“Simple is best… The key is to aim for a balanced meal including a protein, complex carbohydrate and healthy fat.”