Human Rights Watch calls on government to probe mental health centres as it documents abuse in various facilities.
DOES THE END REALLY JUSTIFY THE MEANS IN ALL CASES

An international rights group has called the Nigerian government to ban chaining as it condemned the “terrible” abuse faced by thousands of people with mental health conditions across the country.

Human Rights Watch (HRW) said in a report published on Monday that detention, chaining and violent treatment of mental health patients was pervasive in the country “in many settings, including state hospitals, rehabilitation centres, traditional healing centres, and both Christian and Islamic faith-based facilities”.

“People with mental health conditions should be supported and provided with effective services in their communities, not chained and abused,” said Emina Cerimovic, senior disability rights researcher at HRW.

“People with mental health conditions find themselves in chains in various places in Nigeria, subject to years of unimaginable hardship and abuse,” she said.

Home to some 200 million people, Nigeria is the seventh most populous country in the world. According to the World Health Organization (WHO), one in four Nigerians – some 50 million people – are suffering from some sort of mental illness.

WHO says Nigeria has Africa’s highest rate of depression, and ranks fifth in the world in the frequency of suicide. There are less than 150 psychiatrists in the county and WHO estimates that fewer than 10 percent of mentally ill Nigerians have access to the care they need.

The HRW report came days after Nigerian police rescued nearly 259 young people from an Islamic rehabilitation centre in the southwestern city of Ibadan.

Many captives have said they were physically and sexually abused and chained up to prevent them from escaping.

It brought the total number of people released from abusive institutions in the country since September to nearly 1,500.

At the time, Nigerian President Muhammadu Buhari said in a statement that “no responsible democratic government would tolerate the existence of the torture chambers and physical abuses of inmates in the name of rehabilitation of the victims”.

But HRW criticised the government for failing to acknowledge that this abuse was rife in government-run facilities too.

The rights group said it visited 28 facilities providing mental healthcare in eight Nigerian states and the federal capital territory between August 2018 and September 2019.

It found that people with actual or perceived mental health conditions, including children, were placed in facilities without their consent, usually by relatives.

HRW said in some cases, police arrest people with actual or perceived mental health conditions and send them to state-run rehabilitation centres.

“Once there, many are shackled with iron chains, around one or both ankles, to heavy objects or to other detainees, in some cases for months or years,” the report said.

“They cannot leave, are often confined in overcrowded, unhygienic conditions, and are sometimes forced to sleep, eat, and defecate within the same confined place,” it said. “Many are physically and emotionally abused as well as forced to take treatments.” 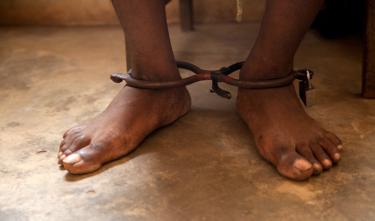 According to HRW, adults and children in some Islamic rehabilitation centres reported being whipped, causing deep wounds.

People in Christian healing centres and churches described being denied food for up to three days at a time, which staff characterised as “fasting” for “treatment” purposes, the group said.

In many of the traditional and religious rehabilitation centres visited by HRW, staff forced people with mental health conditions, including children, to eat or drink herbs, in some cases with staff pinning people down to make them swallow.

The report said in psychiatric hospitals and state-run rehabilitation centres, staff forcibly administered medication, while some staff admitted to administering electroconvulsive therapy to patients without their consent.

The rights group called on the Nigerian government to “urgently investigate” the facilities and “prioritise the development of quality, accessible, and affordable community-based mental health services”