Washington (CNN) – Democrats who want to oust President Donald Trump and Republicans battling to save him are braced for the most momentous phase yet in the battle of impeachment that is rocking Washington.
The showdown that could result in Trump becoming only the third US president to suffer such a fate will resume in the House Intelligence Committee at 9 a.m. ET with appearances by senior national security officials.

Dramatic televised hearings featuring what is expected to be occasionally stunning testimony over the next three days could decide whether Trump’s accusers can establish that he abused his power to pressure Ukraine for political favors. Democrats have simplified their charge against the President — arguing now that he may be guilty of the impeachable crime of bribery after holding up military aid for Ukraine.
The coming days will also be crucial for Republicans hoping to confound a difficult pattern of facts to show Trump did nothing more than exercise his vast authority to set foreign policy.

Should they fail to undermine Democratic claims that Trump offered a quid pro quo, the GOP may have to fall back on a defense that Trump deplores — that his conduct was unpresidential but does not reach an impeachable standard.
Days of packed testimony will also test Trump — who is unable to restrain himself from unloading Twitter blasts against witnesses that Democrats warn could themselves be impeachable acts. 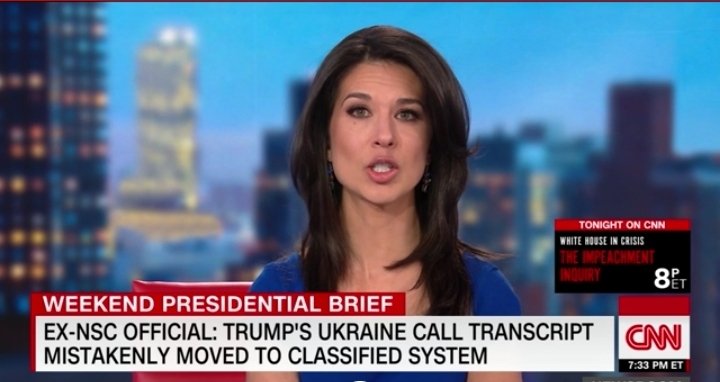 The President sought to remind Republicans on Monday of what he sees as their duty to protect him, in a tweet that claimed that the impeachment probe represented the height of unfairness.
“Never has the Republican Party been so united as it is now,” he wrote. “The rules are rigged by Pelosi & Schiff, but we are winning, and we will win!”
Sondland looms over everything
Hearings will resume after Democrats and Republicans regrouped over the weekend following stunning revelations from key witnesses last week. 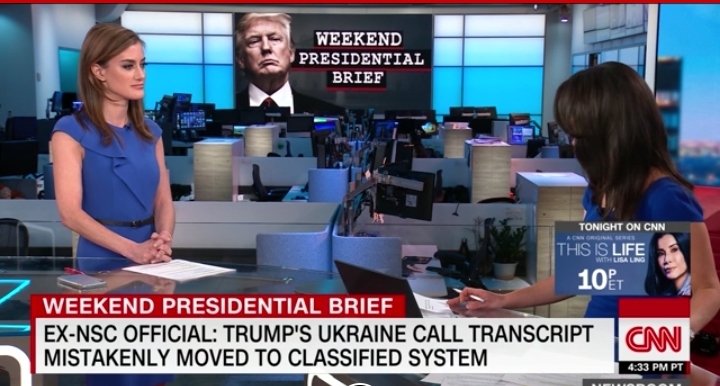 Halfway through two weeks of hearings planned so far, Democrats appear closer to proving their case. But Republicans are so far mostly standing firm behind the President ahead of an expected House impeachment vote next month and a potential Senate trial.
Looming over everything is an appearance by US Ambassador to the European Union Gordon Sondland, who is expected to be grilled by both Democrats and Republicans on Wednesday.
Sondland has emerged as a direct point of contact between the President and the Ukrainians, according to testimony from several key witnesses. 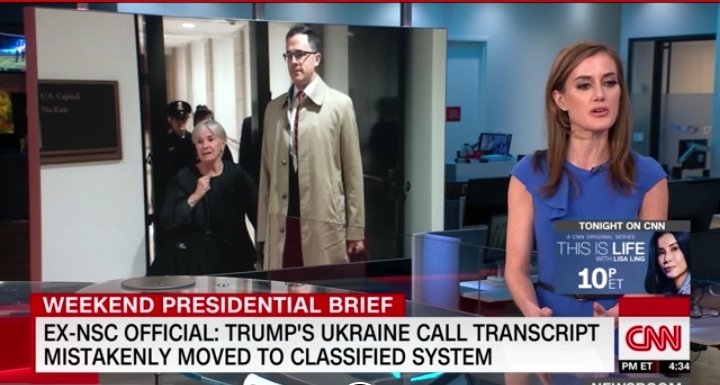 Democrats want him to confirm that Trump ordered him to make nearly $400 million in US military aid conditional on Kiev opening investigations into a conspiracy theory that Ukranians meddled in the 2016 election and into former Vice President Joe Biden.
Republicans are likely to seek to damage Sondland’s credibility as a witness, in a hearing that may force him to choose between limiting his own legal exposure or protecting the President. 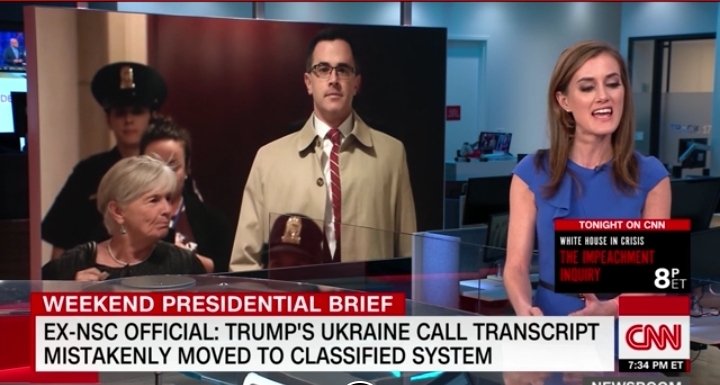 In a new move in the intricate impeachment duel, Democrats scheduled testimony from diplomatic aide David Holmes for Thursday. Holmes said in a behind-closed-doors deposition last week that he had overheard Trump talking loudly on a cell phone call asking Sondland whether Ukraine was ready to open investigations that the President had requested from Ukrainian President Volodymyr Zelensky.
Holmes’ testimony could potentially be used by Democrats to redirect any contradictions to their impeachment case offered by Sondland — or could potentially box him in before his appearance.

Several Republicans were far more shaken by a private deposition of Holmes last week than they let on, CNN reported on Monday.
They expressed frustration that Sondland would place a call to the President from a public restaurant in Kiev, a city crawling with Russian intelligence assets, and are concerned that Holmes’ testimony was the most convincing argument for Trump’s direct involvement in the campaign to pressure Ukraine.
Holmes’ deposition, released by Intelligence Committee Democrats on Monday night, included an almost comical depiction of the ambassador’s call with Trump.

The President’s voice on the other end of the call was so loud that Sondland “winced and then moved the phone away from his ear,” Holmes said.
“He stopped doing that. I don’t know if he turned the volume down or got used to it or if the person, the President, I believe, on the other line moderated his volume,” Holmes said.
A powerful quartet
Before Sondland, a wealthy Republican donor, grabs the nation’s attention, the committee will hear from a quartet of witnesses on Tuesday who can flesh out different aspects of the story. 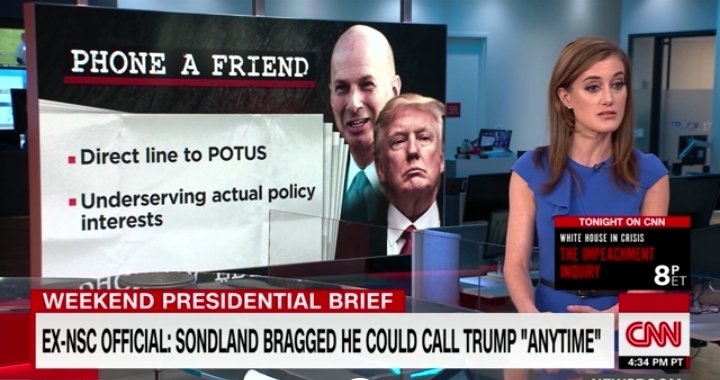 They include several officials who were listening in to Trump’s July 25 call with Zelensky and quickly concluded it was a problem, even though the President describes it as perfect.
Lt. Col. Alexander Vindman, a National Security Council expert on Ukraine, said in a closed-door deposition that he was concerned about the call and Trump’s apparent attempt to enlist the Kiev government in an investigation into a US citizen: Joe Biden.
There is no evidence of wrongdoing by Biden or his son Hunter, who served on the board of Burisma, a Ukrainian energy giant. 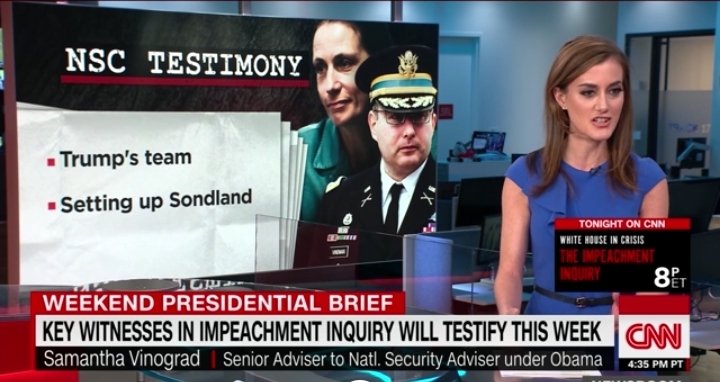 Vindman’s appearance could spark a showdown between House Intelligence Chairman Adam Schiff and top Republicans.
Republicans are expected to ask Vindman about his own conversations following Trump’s July call with Zelensky. Democrats see such tactics as an attempt to expose the whistleblower who first triggered alarm about the call.
“Mr. Vindman has been subpoenaed by Congress,” said Republican Rep. Jim Jordan of Ohio, one of the President’s most vociferous defenders. “That means members of Congress should get to ask the questions they want. Adam Schiff doesn’t just get to ask the questions he wants.”

Alongside Vindman will be Jennifer Williams, a national security aide to Vice President Mike Pence who also thought the President’s conversation was “inappropriate.”
Trump reacted to news of her assessment in testimony released by Democrats by targeting her with his second Twitter attack on a witness in three days, after he went after former US Ambassador to Ukraine Marie Yovanovitch during her appearance on Friday.
Pence’s office notably declined to defend Williams and tried to signal she was not in the vice president’s inner circle by pointing out she was on loan from the State Department.

On Tuesday afternoon, television viewers will get a view inside the back-channel diplomatic track set up by Trump’s personal lawyer Rudy Giuliani to deal with the Ukrainians.
Former US Envoy to Ukraine Kurt Volker, a veteran Republican foreign policy hand, said in a private deposition that he was concerned about Giuliani’s influence over the President.
Republicans are likely to use Volker’s testimony to bolster their claims that the President delayed military aid to Ukraine because he was concerned by endemic corruption in the country.
Also due to testify on Tuesday is Tim Morrison, a former top National Security Council Russia official who could deepen Sondland’s plight hours before the ambassador is due to testify.

Morrison said in his private testimony that he had witnessed a meeting between Sondland and a senior Ukrainian official in Poland. He said the EU envoy told him he had suggested that Kiev could free up military aid by announcing the investigations that Trump wanted.
Trump floats testimony trial balloon
While there have been no hearings since Friday, the political battle over impeachment has been raging unabated.
On Monday, the President responded to a call from House Speaker Nancy Pelosi for him to testify himself by saying in a tweet that he was considering the offer.

Trump’s comment may be a ruse, however, since he had made similar offers to testify to special counsel Robert Mueller but never followed through — though he did eventually answer questions on paper with the aid of his lawyers.
Even that testimony is beginning to look like an unwise risk for the President in hindsight.
It emerged from a federal court hearing on Monday that Democrats are now investigating whether the President lied to Mueller.

Trump’s former deputy campaign manager Rick Gates said in previous court testimony that Trump and his longtime political adviser Roger Stone had talked about WikiLeaks — which released Hillary Clinton’s stolen emails — during the 2016 campaign.
Trump said in his sworn answers to Mueller that he could not recall such a conversation. Stone was convicted last week of seven charges, including lying to Congress.

It was not immediately clear if the revelation from the House general counsel meant that Democrats are considering folding aspects of the Mueller report into the impeachment inquiry.
In another development on Monday, CNN reported that Trump’s aides have eyed removing some officials who testified in the investigation from posts in the White House and other agencies.

Sources familiar with the conversations say Trump was asking how people such as Vindman and the top US diplomat in Ukraine, Bill Taylor, came to work for him. Advisers have warned that firing such officials could be seen as retaliation.
In another sign of hostility to career national security officials who have complied with subpoenas to testify, Secretary of State Mike Pompeo refused to offer specific statements of support for some of the officials.
TM & © 2019 Turner Broadcasting System, Inc.
A Warner media Company.
All Rights Reserved.