In a new National Geographic special, titled Bin laden’s Hard Drive, the digital materials recovered in Bin Laden’s compound, when he was killed in Abbottabad, Pakistan on May 2, 2011, by U.S. Navy SEAL Team Six in an overnight raid, are being analyzed.

Materials seized from the compound by US forces included digital thumb drives.

Officials of the US Defence Ministry say they are not yet sure precisely where in the compound the pornography was discovered or who had been viewing it.

They also said they did not know if bin Laden himself had acquired or viewed the materials as he didn’t have internet at his compound or a computer even though he had some TVs. 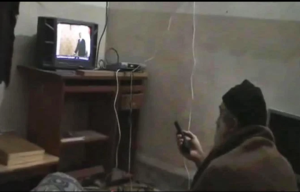 Officials believe these drives may have been a way through which couriers carried electronic messages to and from the al Qaeda leader.

The new documentary also reveals Bin laden’s computers also contained hundreds of news reports and documentaries about himself as he wanted to always be ahead of the media.

Bergen was the first western journalist to interview bin Laden on TV.

Bergen says: “Exploring these hard drives, it’s clear that digital information can say a lot. Osama bin Laden’s files left behind an imprint of a complex man, responsible for the murder of thousands of people.

“History will remember him for that but, in order to cut through the perception of this ascetic in a cave on a holy crusade, it’s important for us to see how he crafted the videos that went out to his followers.

“Understanding him is vital in order to combat other potential bin Ladens in the future.”