A Nigerian doctor has narrated the interestingly odd encounter with a lung cancer patient at a hospital.

Identified @drpenking on Twitter, the doctor revealed that the patient who has lung cancer attempted to sneak out as early as 5am to smoke.

He said the patient tried heading to the back of the ward to attempt smoking Igbo, also known as weed but he was nabbed in the process.

Solutions to the Problem (Power Law)

@Drpenking highlighting what they normally go through, pointed out that “Nigerian patients will frustrate you.”

“Patient with Lung Cancer was caught sneaking behind ward to smoke igbo by 5 a.m. Nigerian patients will frustrate you.” 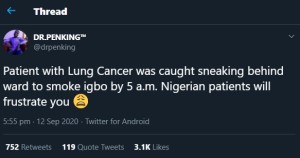