Soldiers have reportedly taken over the scene of the planned #EndSARS protest in Abuja.

Some soldiers were spotted at popular Aya roundabout early Monday morning with a roadblock and barricade. There were also police officers stationed in front of the Central Bank of Nigeria (CBN) headquarters with Armoured Personnel Carrier and water cannons.

This is coming after Nigerian army’s spokesperson, Sagir Musa denied claims of the recently launched ‘Operation Crocodile Smile’ being targeted at #EndSARS protesters.

Here are photos below; 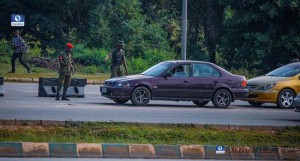